This project follows-up the work started five years ago within the program of the European Marie Curie Research Training Network CavNet focused on “L-type calcium channels in health and disease”. The main issue of the project is on the role that the two L-type channel isoforms (Cav1.2 and Cav1.3) play in the control of action potential firing in chromaffin cells and hippocampal neurons (Mahapatra et al., 2012, Vandael et al., 2013). With the use of KO mice furnished by the CavNet partners we have shown that Cav1.3 channels possess the biophysical characteristics of sustaining the subthreshold “pacemaker current” controlling the firing properties of chromaffin cells (Vandael et al., 2010). We also found that Cav1.3 are closely coupled to BK potassium channels within membrane nanodomains while they are “functionally” coupled to SK potassium channels (Vandael et al., 2012). This later sets the resting membrane potential and the firing frequency of spontaneously active cells.

We are presently interested in understanding how pacemaking is regulated by the long-lasting Cav1.3 channel inactivation and whether the same observation is valid for hippocampal neurons that are shown to express both Cav1.2 and Cav1.3 and possess spontaneous firing activity that changes during development in culture. Hippocampal activity is highly sensitive to DHP L-type blockers and is likely regulated by the Cav1.3 isoform. We will tackle the problem in collaboration with prof. Joerg Striessnig (Innsbruck, Austria; http://www.uibk.ac.at/pharmazie/pharmakologie/) and Dr. Emanuele Sher (Surrey, UK; http://www.lilly.com/Pages/home.aspx) and Dr. Matteo Mangoni (Montpellier, France; http://www.igf.cnrs.fr), with whom we collaborate since years. 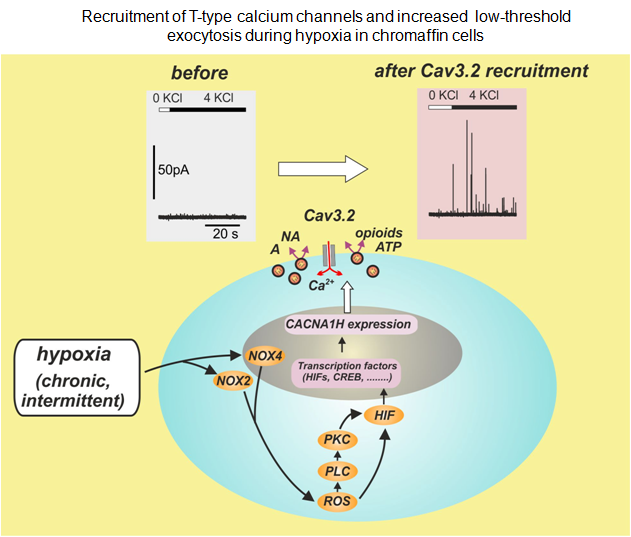 Concerning the T-type calcium channels (Cav3.2) we are interested in understanding the molecular mechanisms underlying their up-regulation under hypoxia (Carabelli et al., 2007) and their role in the control of “low-threshold exocytosis” in rat and mouse chromaffin cells (Mahapatra et al., 2012). Concerning this later issue, in collaboration with Dr. Norbert Weiss (Calgary, Canada; http://cvscience.aviesan.fr/cv/1029/norbert-weiss) we are studying the molecular interaction between Cav3.2 channels and syntaxin and how the protein-protein interaction drives exocytosis.